I’ve definitely been putting off writing this post for a while. You might have noticed if you’ve been following along on my posts about my solo road-trip earlier this year (2018) that I skipped from Shoshone Falls Park to Yellowstone National Park. Craters of the Moon National Monument is a place that has become very dear to my heart. The place and the people I met there taught me so much about myself and others, it is hard to find the proper words to describe the experience, so I’m going to apologize in advance in case this post comes out a little rambly.

After visiting Shoshone Falls Park, I drove the couple hours to Craters of the Moon National Monument (CMNM), where I was met with a new First Come First Serve Camping experience – an automated payment system. Just like at Great Basin National Park, I had to read the signs three times to make sure I did it right. I also made about four trip around the campground and its confusing loops in order to find a campsite that I liked. (By the way, I really don’t know what makes a campsite good or bad other than if I’m sleeping in my truck then I prefer a level spot. I have learned from experience that sleeping at an angle is not fun.)

Once I figured out my campsite, I realized it was a half hour past when I had (stupidly) told my mother I would be arriving at CMNM and to top it off I had no cell reception. My Garmin In-Reach had not been turned on since back in Indiana so it was taking forever to get a signal. I went to the Visitor Center (which is located outside of the park entrance) and asked if they had a public phone. They do not. But, a lady working there told me that the first overlook north of the park usually has cell phone service. So back in the car I went. I was able to get about three bars of service and call my mom to tell her not to expect updates till the following day and my dad was able to trouble-shoot why the In-Reach wasn’t working (he came to the conclusion it was working, I just wasn’t being patient enough – figures).

With all that handled, I went back to the Visitor Center for a second time – in the end, I was probably at the Visitor Center 5 separate times over a 24 hour period for various reasons. I picked up my Junior Ranger booklet, a park map, advice on hiking trails, and postcards. They didn’t have patches but they did have a patch attached to a magnet so I called that good enough. So much for only collecting postcards.

I spent the rest of the day and the next morning stopping at each of the points of interest and hiking the trails. The only trails I did not hike were the Wilderness Trail, North Crater Trail, and North Crater Flow Trail (which was under construction while I was there). My favorites were Inferno Cone and Broken Top Loop.

I hiked Inferno Cone twice. The first time I was hiking it behind an older couple. The trail is short, but nearly straight up. You come over a crest thinking you’ve made it to the top only to realize you’re only halfway there. The wife and I were griping when we figured that out. It was comical. The view is completely worth it though. 30 degree unobstructed view. Even with the haze from the California fires we could still see for miles from the top.

The second time I did the hike was at sunrise the next morning. It was spectacular and was where I had my coming to peace moment with all that I had been through this summer (you can read more about that by clicking here).

I hiked Broken Top Loop early in the morning while the sun was still coming up. It is an interesting trail, encompassing the various geological forms and vegetation that make up CMNM. It was described in a Backpacker Magazine article a couple years ago. Both of these trails I had completely to myself due to the early hour.

The Park Rangers lead a number of programs throughout the day at various points of interest. I did the ranger led cave walk through Indian Tunnel – a lava flow tube that has collapsed in a couple places. There are stairs leading down into the tunnel and it is possible to walk / climb through to the other end. I was the only visitor on Ranger Iza’s cave walk. She’s a couple years younger than me and it was more like friends talking than a geological lecture. I very much enjoyed it. After the cave walk I continued over to Boy Scout Cave. For Boy Scout and Beauty Caves (the two other caves that can be accessed by visitors) a flashlight or headlamp is necessary. There was a family with two little boys at Boy Scout Cave when I walked up. The dad and oldest of the two boys were heading down into the cave while the mom and the other boy waited for them. They just had a little flashlight. I went in the cave because they were going in. They asked me to go in front because I had my dad’s bright headlamp. You can only go a few hundred feet into the cave. The inside of the cave was wet and the condensation on the cave walls and ceiling lit up and sparkled like millions of stars when the light hit them. It was funny because the dad kept thanking me for sharing my headlamp’s light and I kept thanking them for going down into the cave because there was no way in heck I would’ve gone in the cave by myself. There could’ve been a spider the size of a VW Bug living in there! After seeing Boy Scout Cave, I walked to the entrance of Beauty Cave, but I did not go in. I had hit my cave limit for the day.

That night I took part in the short Evening Stroll program, led by none other than Ranger Iza, and again I was the only visitor in attendance. I had fun learning about the trees in the area. They are called Limber Pines and you can actually tie their branches in a knot. There’s the fungus that grows on them called Witches Broom that makes the tree limbs grow all crazy. In the early days of CMNM, park management would cut down the Limber Pines that had Witches Broom, but eventually they learned that it is a symbiotic relationship and they now leave the trees and fungus alone.

I spent the evening sitting at my campsite’s picnic table coloring in my National Park Coloring Book and talking to Ray. Ray was camping at the site next to me. He is from Idaho and had spent the last couple weeks bike packing around the state. This fall his plan was to bike pack southwest Colorado. Ray was the first bike packer I’d ever met. I learned a lot from him, not just about bike packing, but about how easy it is to make friends while camping. I’m a bit shy and tend to keep to myself when camping alone. There was an older couple camping not too far off in a T@B RV. I had never seen one in person and was intrigued, but it never occurred to me to just walk over and start talking to the couple about it. That is exactly what Ray did, however, and he ended up being invited to stay for dinner. I really enjoyed meeting Ray and Ranger Iza during my time at CMNM, they taught me it is possible to make friends in a very short amount of time and to be more outgoing, especially when I’m curious about something.

CMNM is a certified Dark Sky Park, meaning it has very little light pollution allowing for more of the Milky Way to be visible with the naked eye. About 11 PM, I awoke thinking that the sun was already up. Turns out the moon is actually extremely bright. I sat with the door to the truck open and absorbed the beauty of a million starts until the hundreds of bats flying around catching bugs freaked me out and I crawled back in the truck. 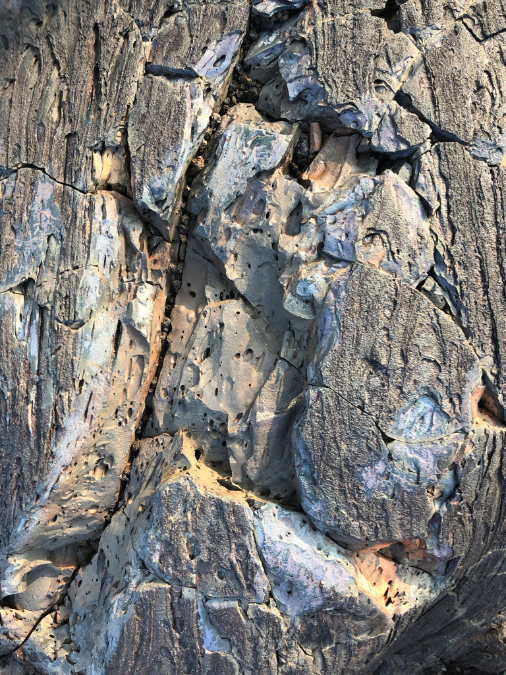 There’s so much more that I could add to this post about the geology, the history, and the cultural significance of Craters of the Moon National Monument, but for now I’m going to leave it at this. Maybe one day, I’ll come back to this post and add all that, for now if you have questions feel free to ask! I hope you can go and experience this National Monument for yourself one day!

3 replies to Craters of the Moon National Monument