Brown County State Park is a beautiful state park near Nashville, Indiana that over the last 2 years I had come to loathe. It’s my own fault, I went hiking there so often for 3 years that I made myself sick of it. Also, it draws a HUGE crowd of leaf peepers who make it impossible to drive on State Road 46 between Bloomington and Columbus from late September to November. I am not a crowd person and I am definitely not a traffic jam on a 2 lane road person.

This past week (February 2018) I decided that it was time to get out of my slump with Brown County State Park. A fellow Women Who Hike member shared an event that the park was hosting on Saturday: The Lake that Never Was Hike – and I thought hiking to somewhere new in the park would be a great way to fall in love with it again – worked like a charm.

Brown Country State Park is the largest state park in Indiana. It covers nearly 16,000 acres and offers some amazing views of uninterrupted forest. Most people come for the fall colors, but my favorite season to visit the park is winter because you can see further without the leaves impeding the view. There are 10 hiking trails, bridal trails, and 12 mountain biking trails. After I graduated from college I spent about a year and a half completing all 10 hiking trails and introducing friends to the park – which is how I burnt myself out on it – I was there almost every other weekend.

The Civilian Conservation Corps started work at Brown County SP in 1934. They built many of the buildings, roads, and trails in the park as well as Ogle Lake. The hike I attended Saturday was to another lake that the CCC started work on, but for reasons that are still unknown, it was never completed. The purpose of the lake and its intended name are also a mystery.

The Lake that Never was Hike was led by Park Ranger Patrick. He was really fun to follow and listen to. My friend Kelsey went with me and we enjoyed the hike and meeting new people. There was about 40 people. 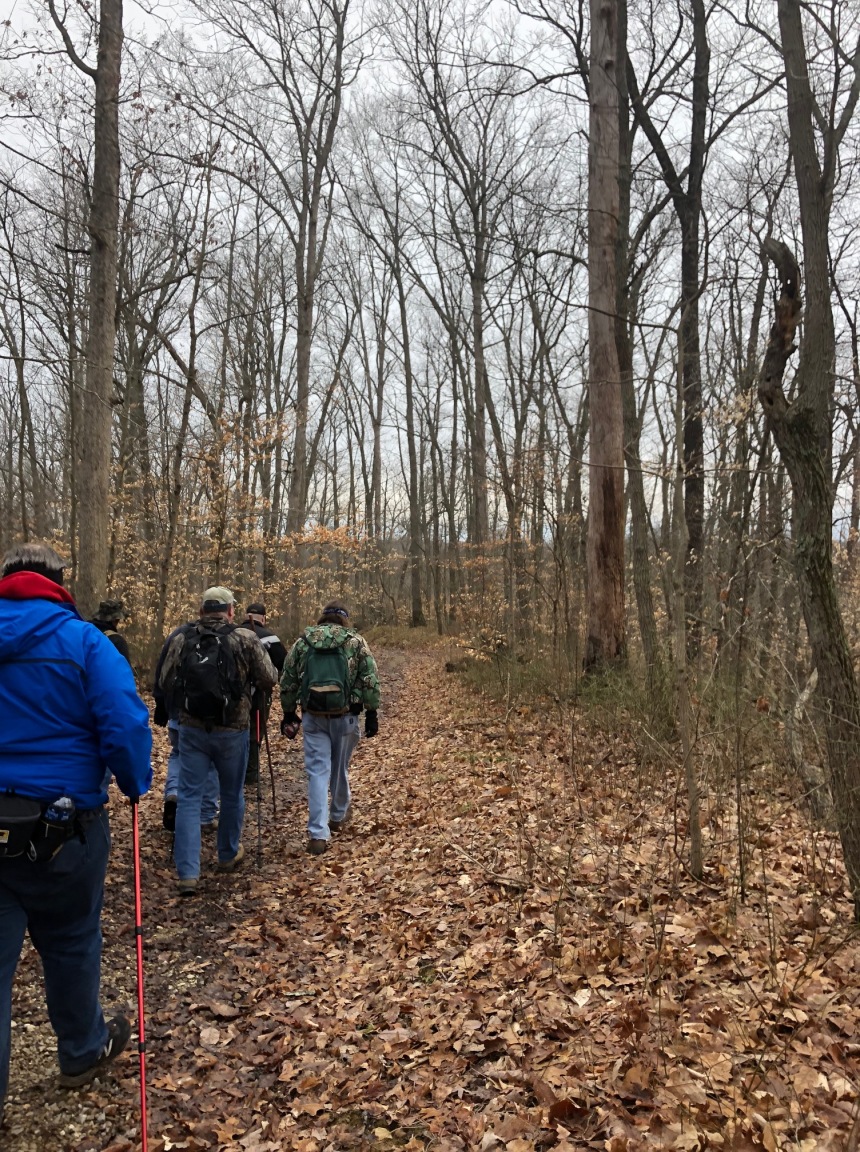 We followed Horse Trail B and 13 through Hidden Valley to the unfinished lake. There were 3 creek crossings (one-way) and the water was high due to the rains we’d had a couple days before. It’s amusing watching 40 people at varying hiking levels cross a creek. Though I can’t really talk, I slipped off a rock and stepped in water higher than my boot. I only buy waterproof over-the-ankle hiking boots because I always end up in a creek or a puddle no matter the time of the year, but they do you no good if said water is higher than the top of your boot….. 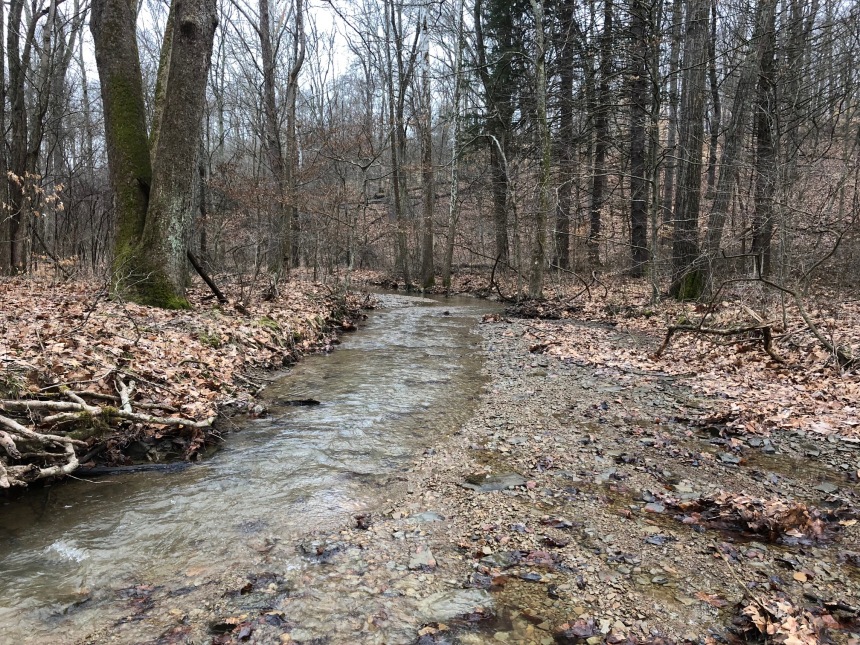 A Brown County State Park volunteer was also a leader of the hike. He taught us a lot of nature things that I’ve disappointingly already forgotten, though I do believe I could pick out Walnut trees now. 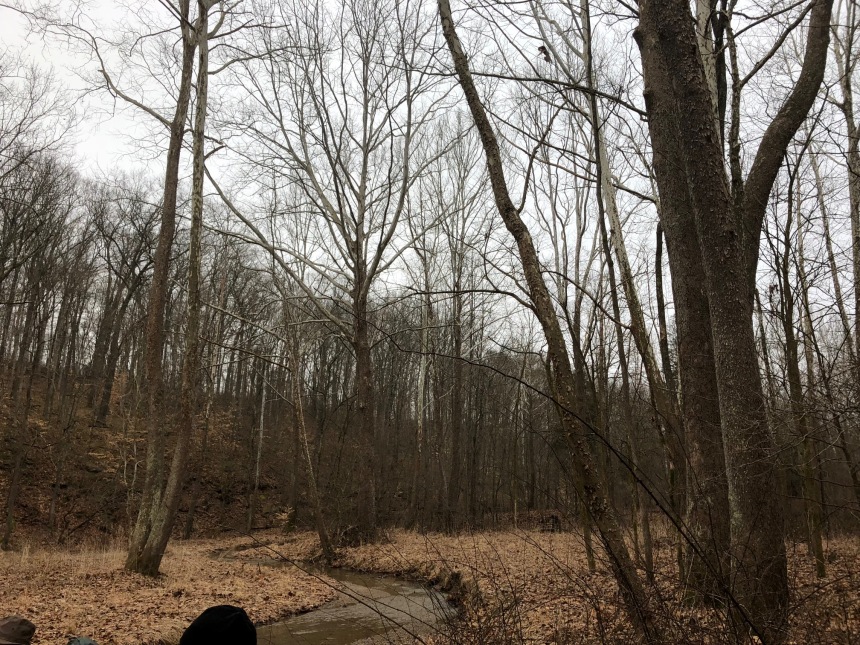 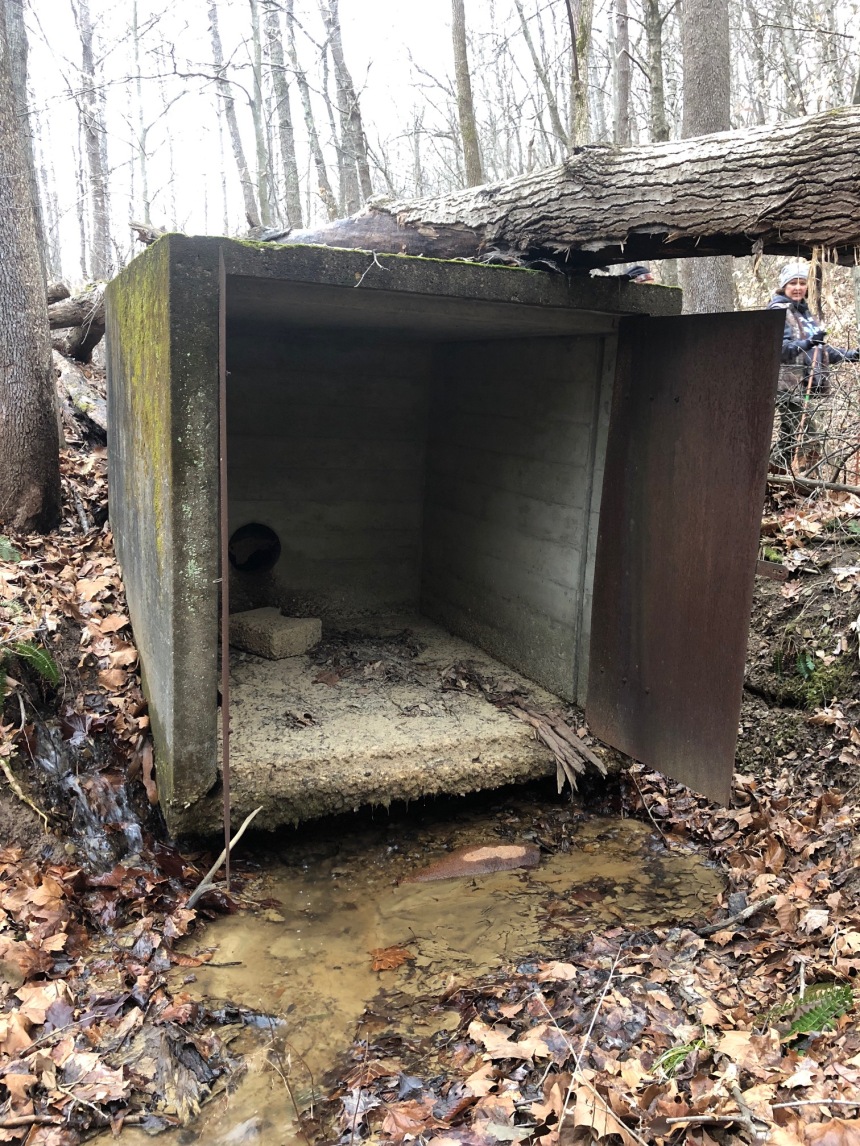 The area relies on surface water for it’s drinking water because the ground water is not reachable / use-able. That is why the CCC built Ogle Lake, so the water could be used. It is also why Lake Monroe was built (another lake in the area).

I loved that there was this whole other “secret” part of the park that I hadn’t known even existed. Park Ranger Patrick said there is also a quarry on the property where the limestone for the park’s buildings was harvested. He plans on leading a hike there later this year and I hope to attend it as well. 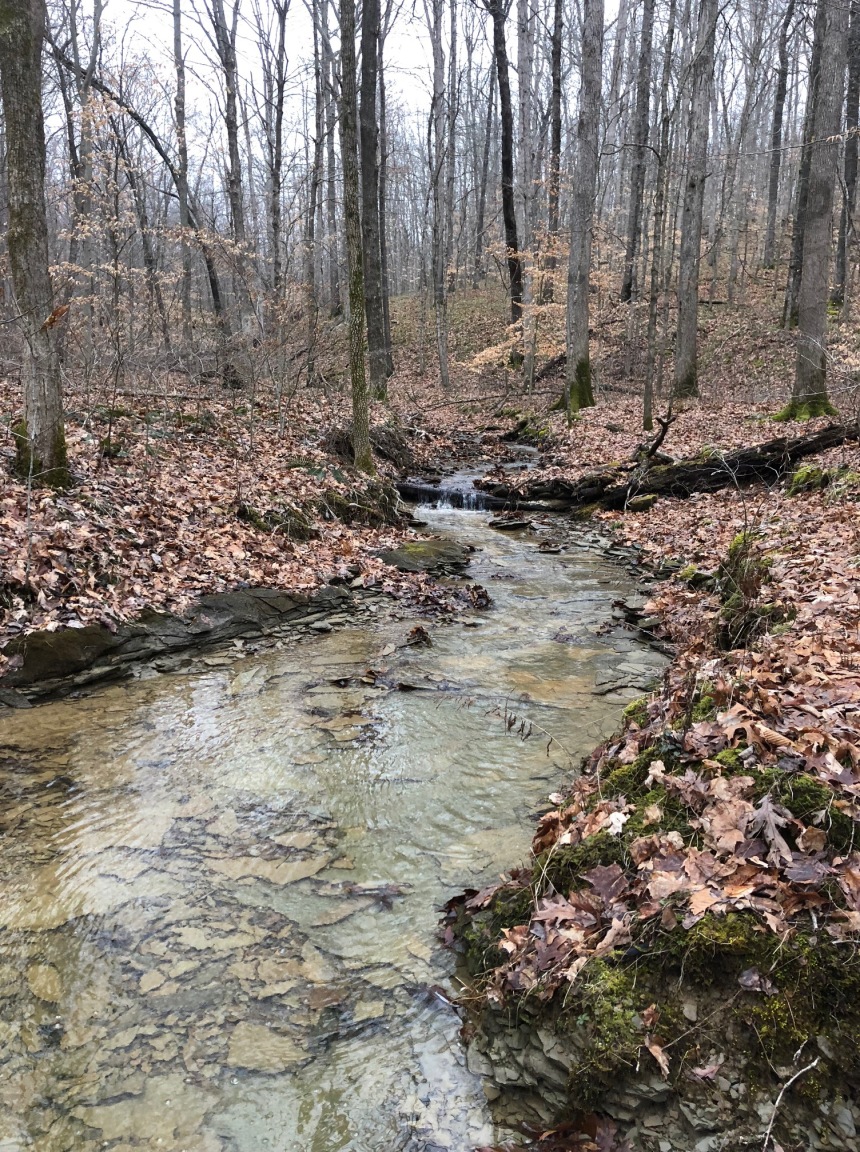 It started to snow as we were finishing the hike. Kelsey and I stopped at the Nature Center overlook to get some pictures of the view. Then we went to the Abe Martin Lodge (in the park) and ate the delicious lunch buffet (there were fried biscuits and apple butter!!). 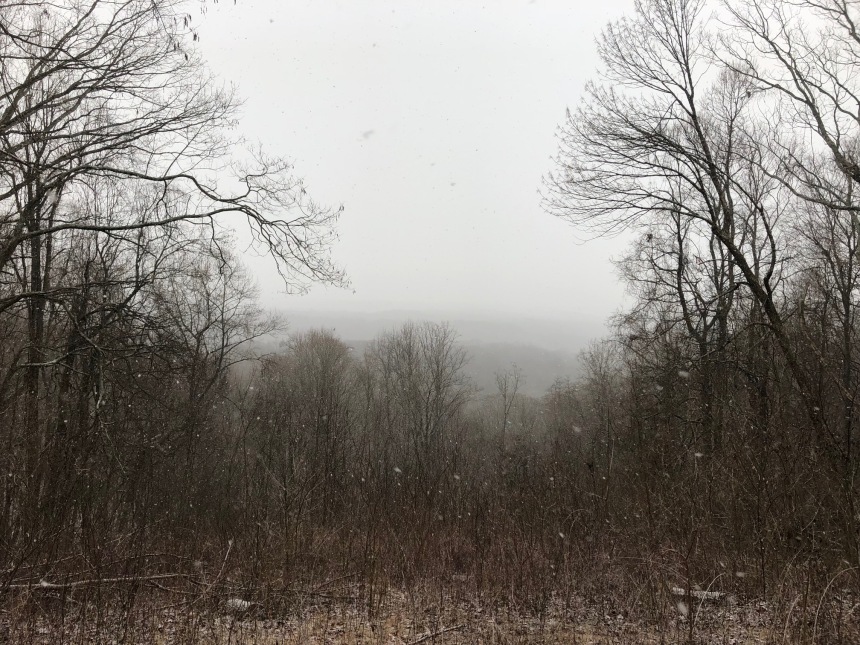 We had our first sunny, semi warm Sunday of the year this past weekend. Shawn and I wanted to do a short easy hike in the afternoon and decided to do Trail 7 at Brown County State Park. It takes you around the banks of Ogle Lake. 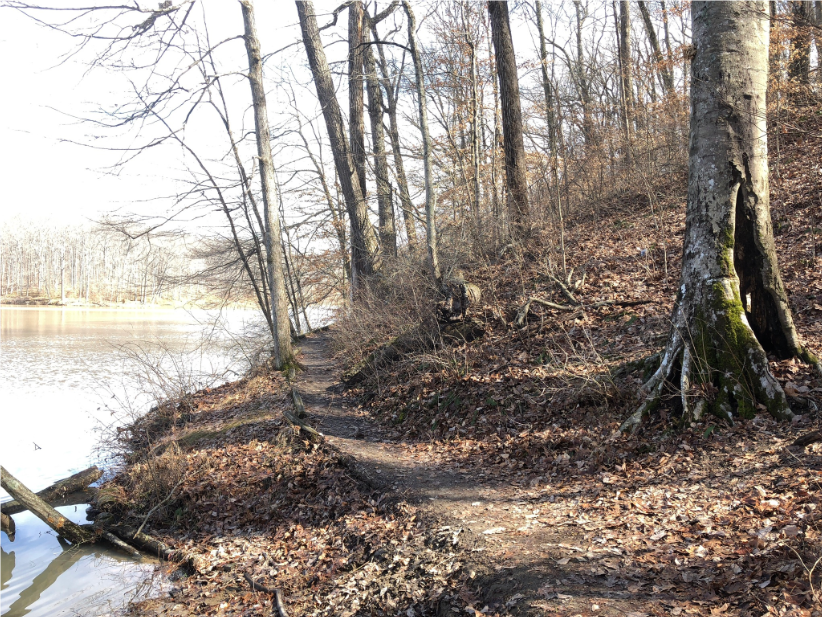 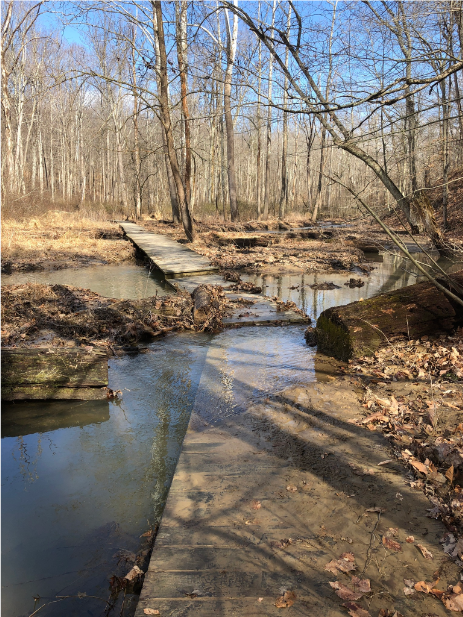 Stairs make the elevation change of Trail 7 very manageable and when the area is not flooded, the boardwalks take care of any water crossings. This trail does get very soupy if it has rained recently.

Trail 9 starts at the same trail-head as Trail 7; Trail 4 connects to Trail 7; and Trail 8 starts from the same parking lot as Trail 7.