On a windy, cloudy day in November, I drug my parents an hour and a half away to Mounds State Park near Anderson, Indiana.

Mounds State Park protects some of Indiana’s best earthworks and mounds created by Pre-Historic Native Americans. Around 160 B.C., it is thought that members of the Adena Nation built the mounds for ceremonial purposes, as well as to track the movements of the sky; later members of the Hopewell Nation used the mounds. Some of the mounds are large and well defined like the Great Mound, while others are smaller and easy to miss, especially when all the leaves are on the ground.

We started out by hiking Trail 2 towards the White River. On the trail map this section is labeled “Boardwalk,” but what they really mean is stairs. 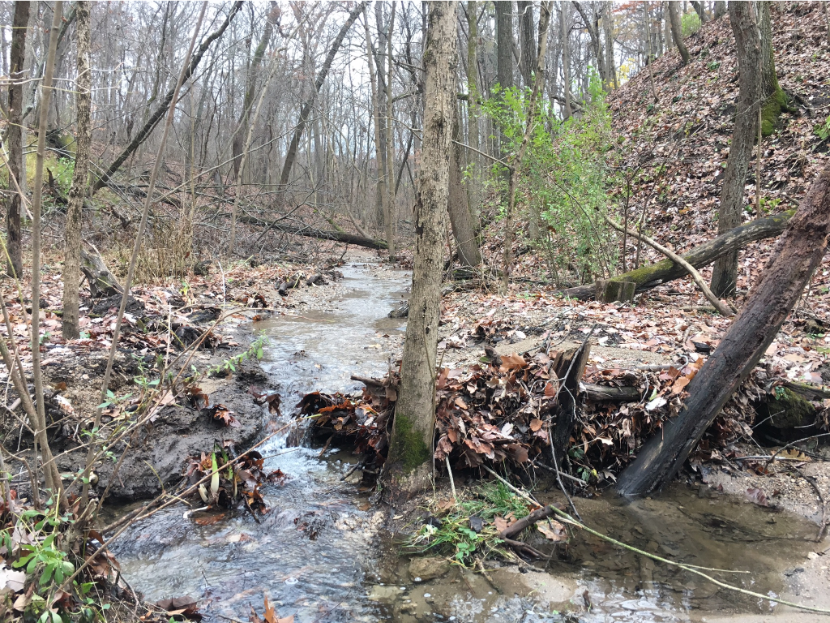 I’m not sure stopping on the way for mom to get more coffee was such a great idea. 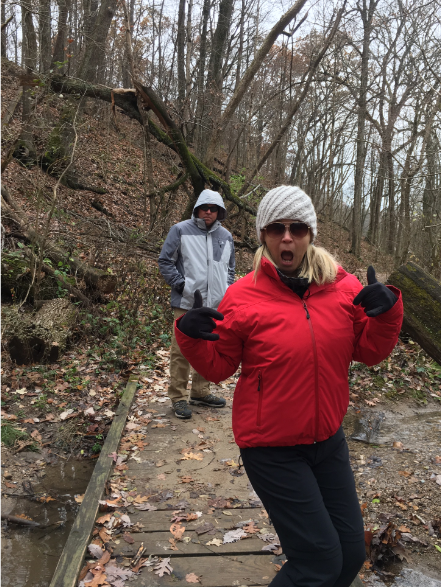 Yep, it was definitely a mistake.

When we were pulling into the parking lot mom’s phone sent her a Flood Warning Alert for Marion County (the county we had just arrived in). It wasn’t wrong. We didn’t get too far on Trail 2 before we had to turn around because the White River was where the trail was supposed to be. So back up the stairs we went.

And then down some other stairs. 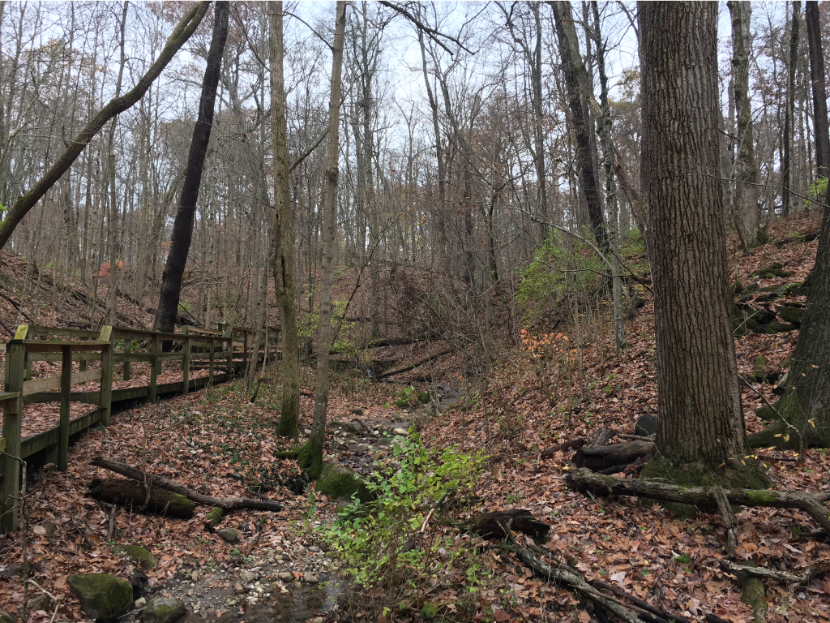 The other half of Trail 2 leads to Trail 1 and was not under water. It did, however, have some pretty little waterfalls running next to it. 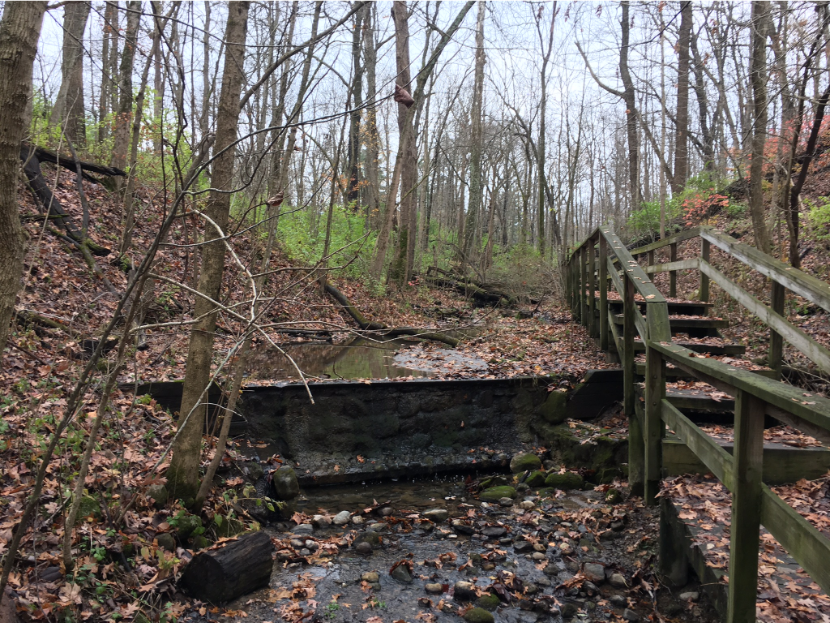 Trail 1 takes you to the Great Mound, the largest of the mounds and the most intact.

The easiest way I know to explain what a mound is, is a hill with a U-shaped ditch carved into the top of it. The center of the U is left raised along with the portion outside the U shaped ditch. One theory holds that the Native American religious ruler led ceremonies from the center of the mound and the community stood on the outside ridge.

We also saw Fiddleback Mound (which looks like the backside of a fiddle) and Earthwork D. We walked right by the Earthwork closest to the Great Mound – it was buried under leaves.

A train used to run along the Southeast portion of Trail 5. The Mounds Amusement Park was open from 1897 to 1929 and was located south of the mounds area. For 5 cents, one could ride the train from Anderson to the Amusement Park and back. All that remains is the concrete foundations of the Waiting Station.

In the early 1800s, the Bronnenberg Family owned more than 600 acres of land, including what became Mounds State park in 1930. The existence of the mounds today is a direct result of the family’s foresight to protect the area from artifact hunters.  Frederick Bronnenberg Jr.’s farmhouse was built in 1840 using materials sourced from the surrounding area including the limestone foundation, quarried from the White River.

The diagrams at the Interpretive Center give a great birds eye view of the mounds and their locations. If you’re planning on visiting Mounds State Park, I would recommend visiting the Interpretive Center first in order to get a better understanding of what you will be seeing (open 9am-4pm everyday, except Sundays in the winter). There are also informational signs by the individual mounds. I liked the frogs and the prettier snakes. There is also an awesome bird viewing room. 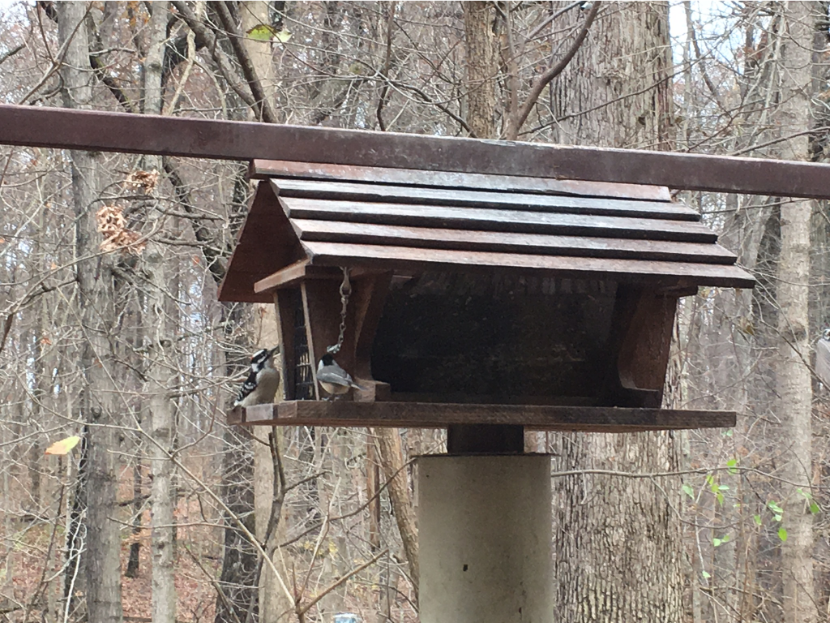