Highlights of mom and I’s adventure on the North Shore Trail at Griffy Lake Nature Preserve:

Griffy Lake Nature Preserve is a favorite of mine from my college days. Man, saying that makes me feel old. It’s only been three years, but it feels like an eternity ago some days.

Anyways…Jess and I used to go to Griffy Lake a lot to kayak. We loved Griffy because the only non-human powered boats allowed on the lake are those with electric trolling motors – making it a perfectly peaceful place to kayak. Until the geese come in for landing, then it gets very noisy with all their honking. Along with being peaceful, a kayak rental for two hours at Griffy Lake is only $8 (they also rent canoes, rowboats, and SUP boards). Jess and I had done a little hiking in the preserve, but not much, which brings me back to last Sunday.

I was in desperate need of some trail time, so even though the forecast was calling for strong storms Sunday evening, I asked my mom to go hiking with me that morning. We chose Griffy Lake because it was something different for us and because of it’s close proximity to Bloomington Bagel Company.

At one point during our college years, Jess and I had tried to hike the North Shore Trail, but the lake was up and cut off part of the trail. I figured since it was getting close to winter, the water level would be down and Mom and I would be able to do the hike. My guess proved to be correct!

The trail runs along, you guessed it: the north shore of the Griffy Lake. The lake has many coves that you have to hike around, so while the dam (turn around point of this trail) seems close, it is actually a mile and a half from the trail-head.

We parked at the Boat House parking lot and walked .1 miles up the road to the North Shore Trail-head. There is a sign with a map of the trail, but it is about 10 feet into the woods from the road, which is why we almost missed it.

We haven’t had the best fall for bright, colorful leaves here in southern Indiana, but Griffy Lake was still pretty with its muted colors. 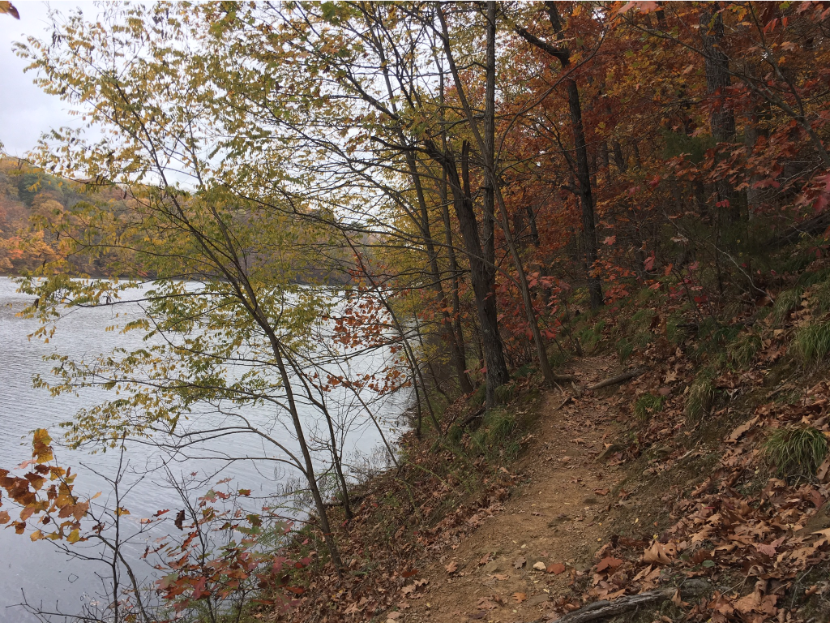 The North Shore Trail is not the best kept trail, in places it gets very skinny and slopes towards the lake. 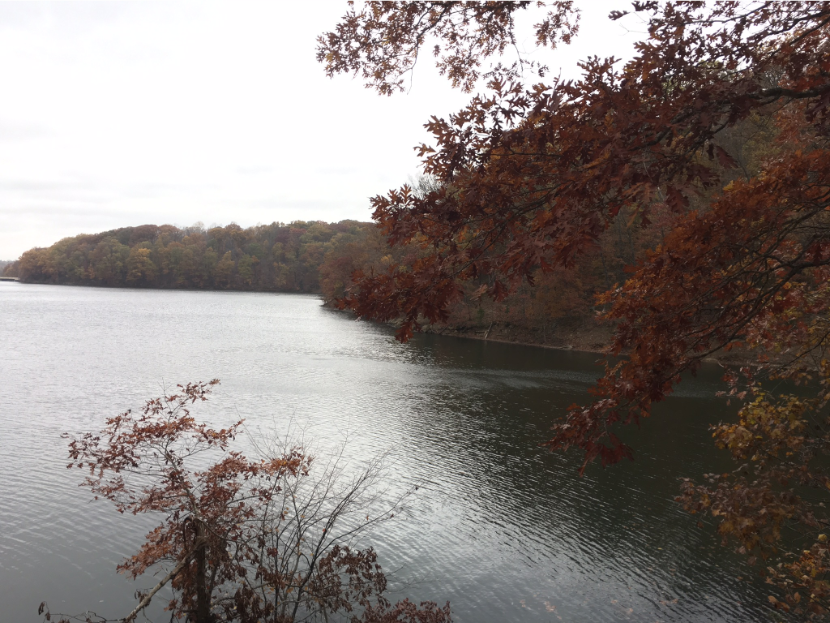 Also, the places where you go around / thru the coves are not well kept or marked. We did a lot of “I wonder if this tree will support my weight?” A couple times I guessed wrong and went sliding in the mud on my rear end.

The North Shore Trail ends at the dam on the west side of Griffy Lake. It was cool to see the dam from on land vs a kayak – it looks completely different.

You can continue along the side of the dam and down some stairs to see the dam from the other side. It sounded like a really loud water fall because of the water running thru the arches. 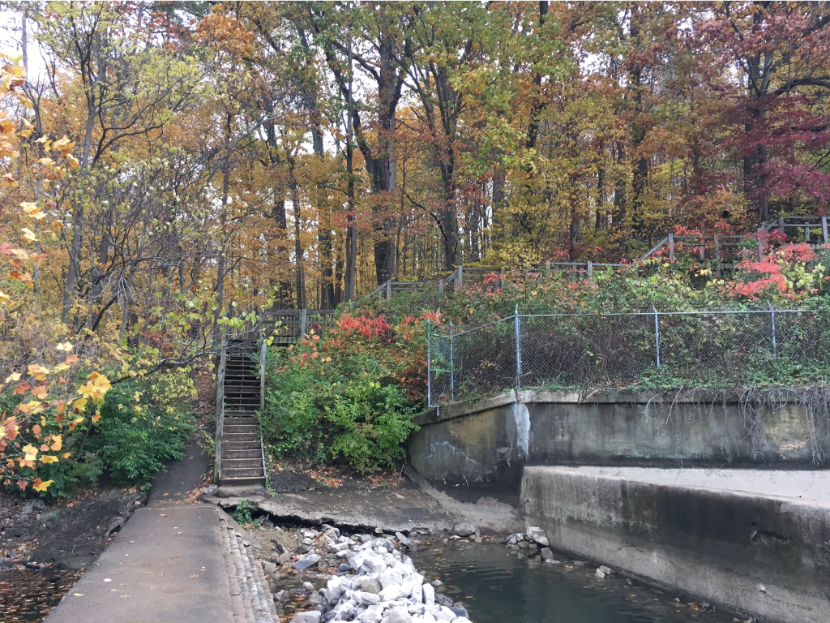 We were heading back to the trail-head when mom started freaking out and pointing. How she even noticed the snake eight feet off the trail from us, I have no idea. He blended in really well with the trees and dead leaves. Mom HATES snakes even more than I hate spiders (refer to: That Time I Went Screaming Thru Spider Webs), so she basically ran the mile back to the car.

From looking at pictures of snakes commonly found in Indiana and their average length along with how long this guy looked and his proximity to the lake, I’m thinking it was either a Diamondback Water Snake or a Plain-Bellied Water Snake. Also, when Jess and I were canoeing with Porsche, a snake swam by us (freaked us both out), so I know there are water snakes at Griffy Lake.

Further along the trail, mom and I were so focused on watching where we were walking (mom because she didn’t want to come across anymore snakes and me because I’d just fallen a second time) that we both shrieked when a dog came running towards us. The dog owner felt bad that his dog had scared us, but we were laughing. We were so preoccupied that we weren’t prepared for a black blur of fur to be charging us.

Overall, it was a fun adventure with mom at Griffy Lake and our veggie bagel sandwiches from Bloomington Bagel Company were delicious! And we made it home before the worst of the storm hit!