We saw an incredible amount of wildlife while in the South Unit of Theodore Roosevelt National Park. It was so much fun!

Our first stop was at the Prairie Dog Town before the Skyline Vista pullout along the 36 Mile Scenic Loop Drive. I had only ever seen Prairie Dogs at the zoo before; it is so much better seeing them up close in their normal habitat. They reminded me of the Meerkats on that Animal Planet tv show, Meerkat Manor – the way they pop out of their burrows and talk to each other with chirps and barks. We really enjoyed watching them.

We also saw some Bison while driving along the road.

My absolute favorite was seeing wild horses! We saw two bands of them, one included two foals. They were adorable. About 60 to 140 wild horses live in Theodore Roosevelt National Park.

We also saw two Coyotes and a group of Pronghorn.

We hiked a guided nature trail called the Coal Vein Trail. In 1951 a coal vein caught fire and it burned for 26 years, completely changing the geography of the area. 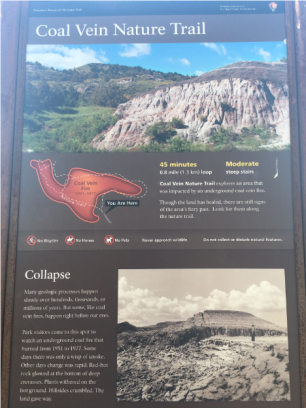 Just before sunset we hiked the Wind Canyon Nature Trail and sat and watched the sunset. There were a bunch of clouds so we only got to see a partial sunset but it was still very pretty. 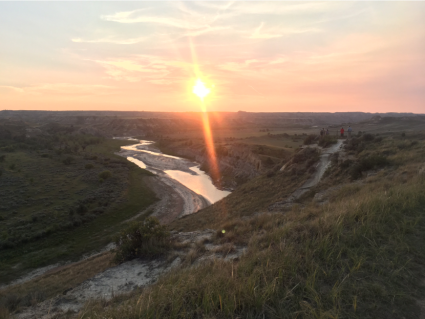 The Visitor Center at the South Unit has an exhibit where we enjoyed learning about the history of the area and about President Theodore Roosevelt time in North Dakota. On display is the shirt President Roosevelt was wearing during his attempted assassination on October 14, 1912.

The Maltese Cross Cabin was moved from its original location to behind the Visitor Center. You can walk through it on your own or Park Rangers give tours at various times.